One of my favorite galleries that never fails to inspire me is the Bard Graduate Center of Decorative Arts, Design History and Material Culture.

“An American Style” , the current exhibit curated by Ann Marguerite Tartsinis encapsulates in this tiny space the period of time when the American Museum of Natural History (AMNH) took a leading role in championing the creation of a uniquely American aesthetic. WW1 halted the production of new designs from Europe and the search for an original identity not based in European traditions was initiated by the burgeoning nationalist spirit.  Art educator Arthur Wesley Dow had been using Native American objects in his teachings and had called for and “a new period style to fill our own needs”  The AMNH  responded and created study rooms where textile and later fashion designers were invited to examine collections of indigenous artifacts from the North and South American collections.

Providing this inspiration spurred the creation of designs interpreted for a receptive audience of consumers.  Photographs of a 1919 exhibit held in the museum that showcased the outcome of their outreach can be seen as well as beautiful sample textiles; particularly those from the Mallinson Silk Company that will be the subject of a future post. There was so much I liked about this exhibit;  the cross pollination of anthropology and design,  the historical context of social change and commerce, public relations etc but it is the single purpose to seek, define and create an American style that fascinates me. A natural evolution into a style identity was curtailed by the War and commerce’s demand for the new begat a solution. In the search for American style the designers and artists came up with not an American but  a universal design language based on the basic fundamentals of design originating in the primitive. Designers continue to dip into the indigenous cultures for inspiration though it is the probably the cowboy who is most identified as an American symbol of style today and the primitive “ethnic” look is now more closely associated with the Bohemian who was at the forefront of this movement. 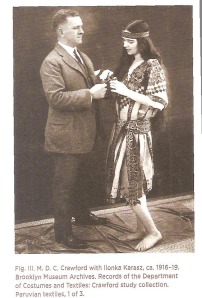 The show is running till Feb 2nd.